GENIE IN A BOTTLE

On the Holi weekend, sometime in March, I visited the Fratelli Vineyard in Akluj near Pune. It was a nice wine weekend that I spent at Fratelli's vineyard. I was also quite lucky to have met Arjunsinh Mohite-Patil personally...he's a lovely host besides being a suave businessman. Here is the travelogue that I wrote for the Footloose page recounting my experience. 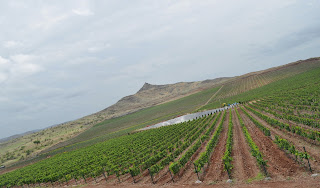 What does one expect from a weekend stay at a property bang in the middle of a vineyard? Some great wine and dine options and ample free time to relax. But what I didn’t expect was a voguish guesthouse, with interiors I would fall in love with, fun ATV and bicycle rides amidst plush vineyards and impeccable hospitality at a home-like guesthouse. Nor did I expect to see, from close quarters, a bunch of passionate men working odd-hours to make their wines. And that’s what made my recent visit to Fratelli Vineyards in Akluj, Maharashtra, an experience that goes beyond wines.

After a four-hour road trip from Pune to Akluj and binging on Maharashtrian cuisine en route, I reached the Fratelli Winery. Even before I could reach my spacious room that had French windows, which opened to gardens overlooking the splendid vineyards, I bumped into the Italian promoters of Fratelli, Alessio Secci and viticulturist Piero Masi, who were busy tasting their wines, since the wee hours. It was six in the evening, and for almost 12 hours the two men were busy just tasting grape juice in its every form! Wine is serious business, and a tough one at that.

Every wine bottle has history packed in it. Three sets of brothers—Andrea and Alessio Secci from Italy, Delhi-based Kapil and Gaurav Sekhri and locals from Akluj, Ranjitsinh and Arjunsinh Mohite-Patil, came together to make wines of international standards right here in India. That’s how Fratelli, which means brothers in Italian, happened. Famous viticulturist Piero Masi was taken on-board (and even has a stake in the company) to create wines that followed Italian tradition, but were cent percent Indian in their making.
For long Indian wines, mostly tucked at the end of the wine menus offered by restaurants, have been sneered at. But gradually the domestic brands are coming-of-age and gaining prominence among their European and American counterparts. And with some Indian wines being seriously considered ‘good’ by many a wine sommeliers the attention is also turning to Indian vineyards. I spent a morning visiting vineyards of Fratelli, Motewadi, Nimgaon and Garwad, that span 240 acres. I was told that around 3,50,000 wine saplings were specially handpicked by Piero Masi and his team, imported from France and Italy and planted at this acreage. I was also lucky to witness one of the late harvests, as the harvest season that kicks in January ends usually by the end of February. Even though best international practices are followed at the vineyard, what caught my attention was how locals were involved in the process, and women of nearby villages meticulously worked on 12 different varieties of grapes that were being grown. Now, this is truly glocal. The supervisor at the vineyard told me that while many wineries in India sourced grapes from contract farmers, at Fratelli, quality is the benchmark that sets them apart, and hence all processes, right from farming are undertaken directly by the company.

After soaking in the natural beauty of the vineyard, it was time to visit the state-of-the-art winery where crushing, fermentation, bottling, labelling and everything-in-between is done to produce the finest of wines. Here, too, I bumped into the two Italian men, Secci and Masi, and local promoter Arjun Mohite-Patil, with their clothes stained with grape juice, inspecting the imported Velo tanks. As we took the tour of the winery, Secci told me how the corridor will soon be adorned with paintings from both Indian and Italian artists and even a restaurant is in the works at the winery, that would offer both the cuisines!

Being a relatively new winery and a brand that was launched in the market roughly 15 months back, the cellar is not monumental, but cosy enough where Fratelli's top-end red wine Sette and other red varieties are ageing in oaks. Interestingly, you can buy a bottle of Sette personalised for you with a label that has your name or anything that you wish to have on it! The only hitch is that you have to order at least 100 bottles to own it. As the new kid-on-the-block Fratelli is promoting wine tourism to enhance wine culture in the country, but there is more it has on its platter. This year, besides Sette, it will be introducing its sparkling wine and dessert wine, upping the number of its offering to 12 from 10 at present.

A chic wine-tasting room, spacious recreation and lounge hall with an open kitchen thrown in for guests to cook or order, as they please—the Fratelli experience spells hospitality. So you don’t have to be a wine connoisseur exactly to enjoy the experience.

On day two we had lunch at the Syrah hilltop amidst the picturesque settings of the Garwad vineyards. It was a 15 minute drive uphill on a bumpy road that only an SUV can tread. But the mesmerising view coupled with some fruity and refreshing Chenin Blanc and smooth Sangiovese later, made it all worth it. At lunch I met a retired couple who drove down from Pune to spend a day at the winery and get some hands-on knowledge about the art of wine making. They looked pleased, especially so because they bought a day-package that included lunch and wine-tasting on a daily deal website for a mere R1,500.
Wine tourism is a genie in a bottle waiting to pop out, with even daily deal websites tapping the space, I thought as I sipped Chardonnay that was not perfect, but a good match for Indian food and the sweltering weather. Only love is probably more intoxicating than wine, but it doesn’t matter as long as you have the love of wine. 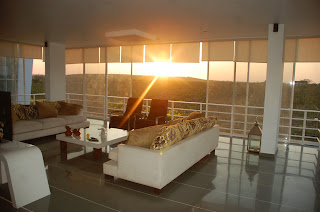 Posted by Vishakha Talreja at 2:19 AM