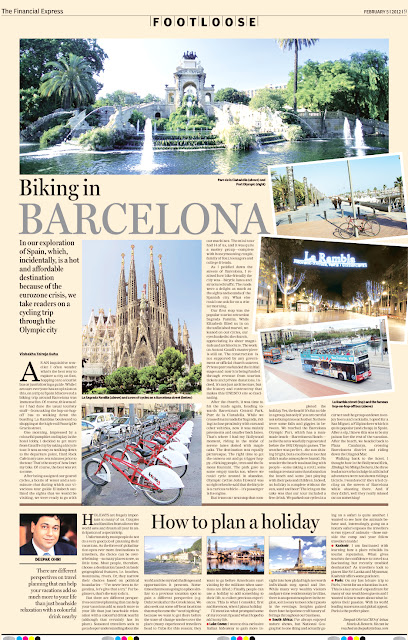 : As an inquisitive traveller I often wonder what's the best way to explore a city, on foot, hopping on to a tourist bus or just following a guide. While I am sure everyone has an opinion on this, on a trip to Spain I discovered a biking trip around Barcelona was immense fun. Of course, this was after I had done the usual touristy stuff—from taking the hop-on-hop-off bus to walking down the bustling La Ramblas boulevard to shopping at the high-end Passeig De Gracia street.

One morning, impressed by a colourful pamphlet on display in the hotel lobby, I decided to get more from Gaudi's city by taking a bicycle tour. It was as easy as walking down to the departure point, Hard Rock Cafe in my case, ten minutes prior to the tour. That's the story of how I met my bike. Of course, the best was yet to come.

After being assigned our geared cycles, a bottle of water and a ten-minute chat during which our vivacious tour guide Elizabeth outlined the sights that we would be visiting, we were ready to go with our machines. The mini-tour had 14 of us, and it was quite a motley group—complete with honeymooning couple, family of four, teenagers and college friends.

As I peddled down the streets of Barcelona, I realised how bike-friendly the city was—bicycle lanes and structured traffic. The roads were a delight as much as the sights and sounds of the Spanish city. What else could one ask for on a winter morning.

Our first stop was the popular tourist attraction Sagrada Familia. While Elizabeth filled us in on the unfinished marvel, we leaned on our cycles, our eyes hooked to the church, appreciating its sheer magnitude and architecture. The work on Antoni Gaudi's masterpiece is still on. The construction is not supported by any government or official church sources. Private patrons funded the initial stages and now it is being funded through revenue from tourists tickets and private donations. Indeed, it's not just architecture, but the history and controversy that makes this UNESCO site so fascinating.

After the church, it was time to hit the roads again, heading towards Barcelona's Central Park, Parc de la Ciutadella. While we crossed main roads for Sagrada, riding in close proximity with cars and other vehicles, now it was mainly pavements and smaller back lanes. That's where I had my Bollywood moment, riding in the midst of serene lanes dotted with maple oaks. The destination was equally picturesque. The right time to get the camera out and go trigger happy...clicking people, trees and the famous fountain. The park gave us some empty tracks too, where we could cycle around in abandon. Olympic cyclist John Howard was so right when he said that the bicycle is a curious vehicle—it's passenger is its engine.

But it was our next stop that completed the holiday. Yes, the beach! It's fun to ride in a group, but only if you are careful not to bump into each other. So there were some falls and giggles in between. We reached the Barcelona Olympic Port, which has a man-made beach—Barceloneta Beach—as the the area was fully regenerated before the 1992 Olympic games. The weather was perfect...the sun shining bright, but a cool breeze too that didn't make atmosphere humid. No wonder the beach was bustling with people—some taking a stroll, some eating at restaurants that abound on the beach and some just playing with their pets and children. Indeed, no holiday is complete without the sun, sand and beer! The icing on the cake was that our tour included a free drink. We parked our cycles in a corner and the group sat down to enjoy beers and cocktails. I opted for a San Miguel, a Filipino beer which is quite popular (and cheap) in Spain. After a sip, I knew this was to be my poison fore the rest of the vacation. After the beach, we headed back to Plaza Catalunya, crossing Barceloneta district and riding down the Diagnol Mar.

Walking back to the hotel, I thought how in the Bollywood flick, Zindagi Na Milegi Dobara, the three lead actors who indulge in all kind of adventures were not shown riding a bicycle. I wondered if they tried cycling on the streets of Barcelona while shooting there. And if they didn't, well they really missed out on something!
Posted by Vishakha Talreja at 6:04 AM