Homestay Gets the Branding Edge

Bed, breakfast and a brand umbrella to boot

Vishakha Talreja
Posted online: 2010-06-19
New Delhi
Home-cooked food, local culture and cuisine, warm, friendly accommodation and company for dinner: the increasing popularity of homestay tourism, which has caught the fancy of not only foreign tourists, but evolved domestic travellers too, is not surprising.
Providing a fillip to the growth of this alternate accommodation segment is the foray of private players. Companies such as Mahindra Homestay, Comfort Homestay and Pride Hospitality Group are not only helping home owners-turned-hoteliers sell rooms, but also in marketing, giving it a branding edge.
The tourism ministry’s bed; breakfast (B&B) policy and state policies have led to the spurt of more than 2,000 homestay accommodations across the country. However, it’s the private players who are developing the product online and offline, besides working closely with state governments to train home owners and getting things organised.
Mahindra Homestays, part of Mahindra Holidays and Resorts, covers 240 homes with 663 rooms across 15 states. “Partnering with us is convenient for home owners, who get brand affiliation too. We saw this as a potential segment as we want to cover every aspect of tourism, especially inbound. We also see this as responsible tourism,” says Vimla Dorairaju, business head, Mahindra Homestays. Though she did not divulge the company’s revenue details, she said that the company earns about 20-30% of room revenues while the balance goes to the home owner.
Pride Hospitality markets more than 350 homes in Delhi and Jaipur under the Pride Homestay brand. According to director Arjun Kumar, it is a profitable business, especially for hoteliers who have the experience and execute it in a cost-effective manner. “We standardise and categorise the product so a tourist knows what to expect,” adds Kumar.
New Delhi-based Comfort Homestay, owned by Maharaj IS Wahi, an inbound tour operator, has more than 500 properties under its wings. Of these, around 300 are sold online. The company emphasises that they are not just selling the product, but are helping home owners by training and familiarising them with legal and security aspects. “It’s not just about superficial branding, but giving the right exposure to home owners and adding value to the product,” says Comfort director Ekta Capor. She says that the company’s margin varies between 5% and 15% depending on the property. “Since the homestay category is still in its nascent stages, margins are not very high. But we only see the trend growing,” she adds.
Many players work in close proximity with state governments, organising the business better. Comfort Homestay has an exclusive tie-up with the Karnataka government, while Mahindra Homestays has signed memoranda of understanding (MoU) with Kerala, Rajasthan and Uttarakhand. MoUs with Punjab and Tamil Nadu are also on cards. The state governments look after the policy aspects including taxation and security while the private players sell the product, market and maintain standards.
Private players claim that they are making the inventory available in an organised fashion and also helping the home owner by training them. “We give them our brand and ensure that safety standards are met. Also, we have audits and provisions for customer feedback to ensure quality,” says Dorairaju.
The private players insist that branding is helping home owners grow their business. “Take Karnataka for instance, where average occupancy even during weekends was 30-35%. Now, these homestays are full during weekends,” says Capor.
Besides companies, online travel players and tour agents are also enthusiastic about B&B accommodation, but their job is restricted just to selling and not marketing or getting involved with the product. For instance, the Indian Association of Tour Operators (IATO) is assisting the tourism ministry in approving and inspecting homestay properties in Delhi, after the government approved the B&B policy to cover the hotel room shortage for the Commonwealth Games. IATO is also helping home owners sell rooms. Though the segment is fragmented still and there are many unapproved homestays, the entry of private players is clearly a huge step forward.
Posted by Vishakha Talreja at 6:30 AM No comments: 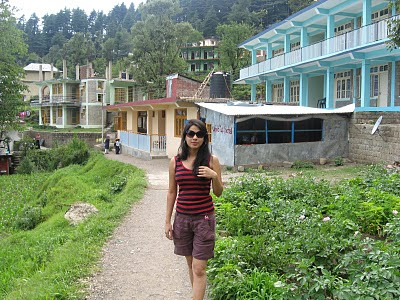 Travel to McLeodganj is usually for spiritual or escape-the-sweltering-summer-in-the-plains reasons. Of late, however, an emerging reputation for its cuisine has been drawing foodies there.
Home to the exiled government of Tibet, McLeodganj is a haven for many foreign tourists and has exciting cuisines on offer, mainly Israeli, Tibetan and Italian.
The picturesque hill station is abundant with small eateries, pretty-looking cafeterias adorned with candles and lamps and the quintessential coffee shops, most wi-fi enabled. For starters, there is Namgyal Cafe, located at a stone’s throw from the Dalai Lama Temple, a ‘must visit’ for tourists. This cafeteria serves vegetarian food—thin crust pizzas, crepes, cakes and cookies. Fruit beer complements the freshly made pizzas, though ‘fresh’ means having to wait for a good 30-40 minutes for the food to arrive. There is a silver lining in the form of a small library, where you can flip through books ranging from popular fiction to spirituality. Nick’s Italian Kitchen, Tibet Kitchen and Green Restaurant are some other eating joints worth checking out on Bhagsu Road.
For those craving excitement, ‘Xcite’ is the place to hit for beer and grub. The place claims to be McLeodganj’s only club, if a club means a big screen playing a FIFA match, lots of beer guzzlers, groups smoking hookah and noise till the wee hours. The terrace eating joint is opposite another three-storeyed restaurant, McLo, which offers some Indian champagne and wines (not by glass), though the food is average.
If your stomach is not quite resilient, breakfast at Ayurveda Cafe is a safe bet. This tidy place offers healthy food options like poha, dosa, fresh fruits, banana lassi and honey lemon. There are interesting thalis, which allow one to go whole hog without adding calories. One can also book an ayurveda body massage here, of which the masseur does a good job.
Besides restaurants and cafes, the street food options on McLeodganj’s Mall Road are also galore. What gol gappas are to Delhi or pav bhaji to Mumbai, momos and thukpa are to this place. Binge on mouth-watering mutton or chicken momos at the small kiosks or munch homemade chocolate cookies available at small bakeries.
A gourmet trip to McLeodganj is incomplete without a day’s tour to Dharamkot, a 15-minute drive uphill from McLeodganj. The small village, dotted by bread & breakfast eateries, is home to many long-stay tourists. Most cafes here have seating in the open, offering full view of Himachal’s scenic beauty. A recommended cafeteria here is Pizzeria, that one can locate with the help of locals, as there are no signboards. It’s amazing to learn that so many tourists actually walk down the narrow hill roads, crossing fields to reach the cafe. But the walk is worth it. Tuna pizzas with fresh cheese that melts in your mouth, all with the breathtaking view, hit the right spot.
Cafes in Dharamkot are not about food, but the experience. Cafe Nirvana exemplifies this. At this small designer cafe one can spend hours trying different types of pancakes, sipping lemon tea and just gazing at the mountains. The seating is relaxed, with nice colourful mattresses and low lying tables giving you a home-like feel. The trance music that continuously plays in the background truly is liberating!
Though the cafes might not be stocked well with urban food-extras such as chilly flakes or mustard sauce, the staff at most cafes is friendly (read overzealous to serve, in a nice way). The cherry on the cake—you can have a lip smacking meal and the smallness of the bill will only add your sense of well being. Little Lhasa is truly a paradise for those who live to eat, or shall we say travel to eat!

Posted by Vishakha Talreja at 6:14 AM 3 comments:

India’s hospitality sector marred by recession and the 26/11 attacks is showing signs of recovery, but all is not hunky-dory with the star category hotels of the country. First the volcanic ash and now the weakening of the Euro has impacted business coming from the largest source market for Indian tourism sector—Europe. No wonder then that occupancy and room rates don’t look as gloomy as last year, but then not as healthy as projected.
Western Europe, which includes France, Germany, Italy, Greece, UK and Ireland besides other countries, contributes more than 30% of foreign tourist arrivals into the country. The figure for total foreign tourist arrivals (FTAs) visiting India last year is pegged at 5.11 million.
The Greek tragedy has left many hotel suites bereft of it’s guests. As most hotels quote prices in rupees now, weakening of the euro makes hotel rooms expensive for those using the currency. Says president and CEO of the Claridges Hotels & Resorts, Peter Leitgeb, “Europe is our key feeder market and with Euro weakening our business is being impacted adversely. European countries are facing economic challenges, the travel sentiment is definitely not upbeat.” Adds a senior official from the ITC’s hotel division, “Our properties in metro cities have not really been hit as domestic travel and traffic from Far East is booming. But yes heritage properties for sure have seen a dip in the number of travelers from Europe”.
And it’s not just revenue from the room rates that the hoteliers are worried about. Lower purchasing power means less spending on shopping, food and beverage (F&B), spas and other sources of revenue for the hotels. “Though we have not seen an immediate impact but there is likely to be a fallout. It will impact spending on F&B and also on new bookings of the group traffic,” opines KB Kachru, EVP South Asia of Carlson Hotels. For Carlson properties in India, of the total revenue that comes from foreigners, European market contributes 30-40%.
The timing could not have been worse. Hotels were still trying to recover from the aftermath of the global recession and the 26/11 attacks which changed the fate of the hotel industry in India. “The recovery has been feeble as compared to last year and to make things worse we have lost 8% of our top-line because of volcanic ash and Euro crisis,” says Rahul Pandit, VP-operations of the Lemon Tree Hotels which operates 12 properties across the country under four and three star category. As per the tourism ministry data, FTAs during the month of April 2010 were 3.54 lakh as compared 3.48 lakh in April 2009 and 3.61 lakh in April 2008. Growth rate in FTAs during April 2010 pegged at 1.7% is much lower than 12.9% that was registered in March 2010.
In the US, which also banks on European tourists, average room rates have softened as discounts are being doled out to foreign travelers. Though occupancy levels have not been hit hard. Experts believe that’s what the fallout perhaps will be for the Indian market, too, in the long run.
According to the Crisil report of March 2010 average room rates across major cities have shown a downward trend but the revenue per available room (RevPAR) has increased marginally as compared with last year as occupancy rates have increased.
Posted by Vishakha Talreja at 2:52 AM No comments: